A balance between the environment, society and the economy must be achieved to meet the sustainable development targets of any given population. The future should also be factored into any discussion regarding how this balance is reached because what we do today will affect future generations. Environmental management standards provide a framework that can be used to protect the environment and respond to changing environmental conditions, while also meeting socio-economic needs.

In the UK, the environmental movement began as a response to the Industrial Revolution in the 18th and 19th centuries, with public anger over smoke pouring from the stacks of coal-burning factories. As a result of environmental problems (such as fuel emissions leading to acid rain and possible climate change, and excessive use of non-renewable natural resources) being caused by the combined actions of worldwide businesses, most UK environmental law therefore originates from European or international legislation.

In 1987, the United Nations World Commission on Environment and Development (known as the Brundtland Commission) published a report called Our Common Future, which used the term ‘sustainable development’ and called on industry to develop effective EMS.

In 1992, supported by more than 50 world leaders, the United Nations Conference on Environment and Development (UNCED) took place in Rio de Janeiro; it was known as the Earth Summit. At the time, steps were already being taken by different groups to standardize EMS, and a number of national standards for environmental management began to be published, including the British Standard BS 7750 and the French Standard AFNOR X30-200.

In 1993, the European Commission produced a regulation on environmental management and auditing with the Eco-Management and Audit Regulation (1836/93/EC), which included the Eco-Management and Audit Scheme (EMAS). This regulation established specifications for voluntary EMS for companies doing business in the EU. During this time, the International Organization for Standardization (ISO) established a new technical committee known as TC 207 to develop an international EMS standard, together with other standards on environmental management tools and techniques.

Subsequently, in 1996, the ISO 14001 EMS specification was adopted and published.

In 2004, ISO 14001 was significantly improved and supported by a comprehensive guideline, ISO 14004 Environmental management systems: Requirements with guidance for use.

In 2012, the ISO Technical Management Board developed Annex SL (a standard high-level structure) to rationalize the numbers and titles of all subsequent management system standards.

The current version of the standard was published in 2015, supported, a year later, with an improved guideline ISO 14004:2016. 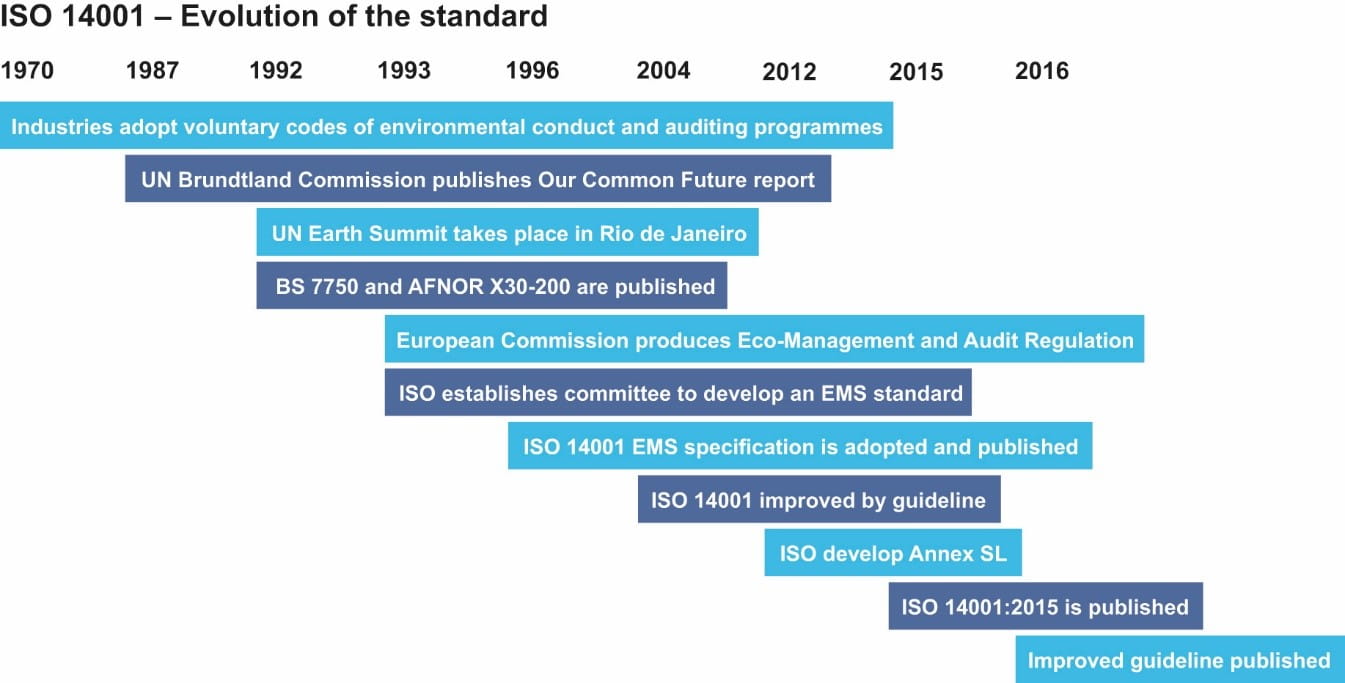 ISO states that the purpose of ISO 14001 is to provide organisations with a framework to protect the environment and respond to changing ­environmental conditions in balance with socio-economic needs.

Due to the time required to properly review and approve the standards across the member ISO countries, the development cycle time is often in excess of five years.